If the private SSH key already exists, this can be done from within FileZilla, without the need to install extra software. Simply go to menu Edit → Settings → Connection → FTP → SFTP. Click button Add key file and add your private key there. It will convert the key for you.

There are two ways to configure OpenSSH. Individual users can be configured in openssh or (my preferred solution) a group can be created and configured in OpenSSH. This group can then be assigned to the users who should be restricted to sftp only. Edit the /etc/ssh/sshd_config file and include the following section at the end of the file.

The above configuration section (the “Match” block) must be the last configuration item in the config file. Any configuration following a Match block overrides the general settings when the Match conditions are met. In the above example, the two configuration items are only used when the user is part of the “sftponly” user group. The “ChrootDirectory” locks the user into the directory specified as argument. The “%h” represents the user’s home directory, allowing the match pattern to lock each user into his own home directory. The “ForceCommand” ensures that the user cannot trigger any other command, but only enter the “internal-sftp” subsystem.

It is also necessary to configure the sftp subsystem to use “internal-sftp”. Also in the /etc/ssh/sshd_config ensure the following configuration is set. Otherwise the external sftp-server will be used, which can not be found inside the chroot jail of the user.

The configured group needs to exist on the system to assign it to the sftp users. The following command will create this group.

Finally the ssh daemon needs to be restarted to load the new configuration.

To ensure the sftp only user is only allowed to use sftp, additional restrictions can be added to the match block.

Some of the most common restrictions are shown in the example above.

A new sftp only account can now be created and prepared. As described above, the user needs to be assigned to the group used in the Match block.

The “-G” option adds “sftponly” as a supplementary group to the user “user1”. With the “-s” option, the user gets “/sbin/nologin” as shell which denies interactive shell access for the user. This command will automatically (if not instructed otherwise with additional arguments) create a home directory for the user. The permissions of the home directory need to be modified for the chroot jail to work.

The permission can either be granted by just adding the read and execute permission to the group as shown in the above command or numerically as “0750” setting implicit permission for user, group and other.

Limitations of this setup

To allow the user to upload content via sftp, a subdirectory should be created for this purpose. The created directory’s owner will be the user, allowing him to manage files and directories within the subdirectory freely. 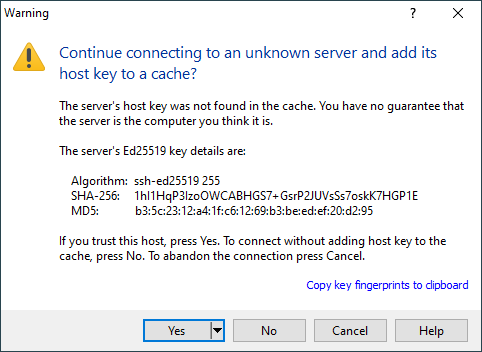 The above example creates a directory called “data” in the user’s home directory and changes the owner of it to the user. Now the user can manage data inside this directory. In some web-hosting scenarios the directory is named “public_html”. This allows the user to upload web-content while still being locked into his home directory.

To be able to configure an authorized key for the user, the “.ssh” directory must be created and changed to the correct owner and permission.

With the .ssh directory prepared and owned by the user, the user can upload his key already by himself as needed. For more details about adding a key, see SSH passwordless login with SSH-key.

To test the configuration, connect with the sftp command line client as shown below.

Depending on the configuration, you will either see the prompt “sftp>” or, if no ssh-key was yet added, you will be prompted for the password of the user.

Should there be any issues with the connection or the acceptance of the ssh-key, the sftp client allows to pass ssh options using the “-o” option.

The above example will try to connect to the server with the ssh log level set to debug. This will provide more details about problems from the client’s perspective.

On the server the log files will provide information about what went wrong. On RedHat based distributions, the related log is “/var/log/secure”. Even the ssh daemon on the server supports the “LogLevel” setting in the /etc/ssh/sshd_config file.

Read more of my posts on my blog at https://blog.tinned-software.net/.

In every SSH/SFTP connection there are four keys (or two key-pairs) involved. This article explains a difference between them and what keys an SFTP client user needs to care about.

A user private key is key that is kept secret by the SSH user on his/her client machine. The user must never reveal the private key to anyone, including the server (server administrator), not to compromise his/her identity.

To protect the private key, it should be generated locally on a user’s machine (e.g. using PuTTYgen) and stored encrypted by a passphrase. The passphrase should be long enough (that’s why it’s called passphrase, not password) to withstand a brute-force attack for a reasonably long time, in case an attacker obtains the private key file.

A user public key is a counterpart to user private key. They are generated at the same time. The user public key can be safely revealed to anyone, without compromising user identity.

To allow authorization of the user on a server, the user public key is registered on the server. In the most widespread SSH server implementation, the OpenSSH, file ~/.ssh/authorized_keys is used for that.

A host public key is a counterpart to host private key. They are generated at the same time. The host public key can be safely revealed to anyone, without compromising host identity.