Nintendo Switch deals don't usually hit premium peripherals like Mario Kart Live: Home Circuit - especially when stock has struggled on release. However, we've seen a £10 discount offering the AR kart racing game for £89.99 over the last few weeks and Amazon has just taken things a step further, dropping that price all the way down to just £79.99 this week. 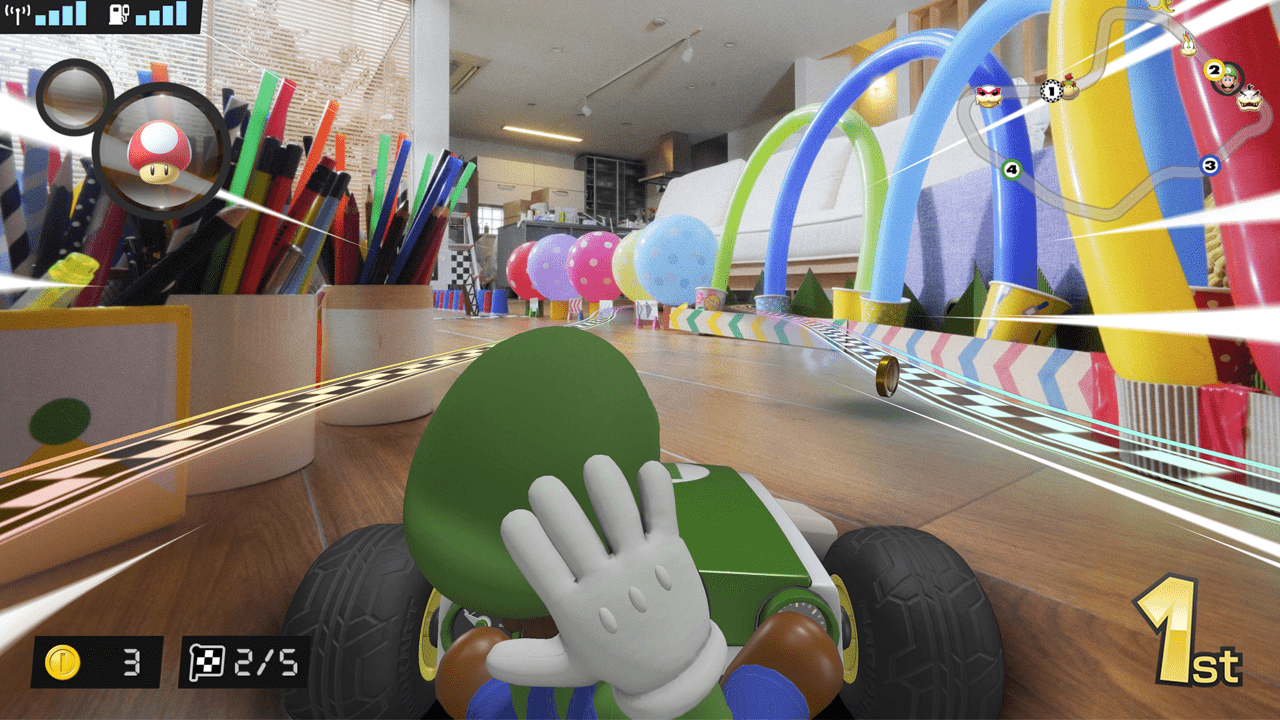 That's a total saving of £20 over the £99.99 RRP, and we're seeing both the Mario and Luigi sets offering healthy stock levels right now. That might not be the case for long, as the Mario version often sells out when on sale - so we wouldn't wait too long to make the most of these Nintendo Switch deals.

Each pack contains one AR racing kart which can be controlled using your Nintendo Switch system. The camera sitting atop each car then allows you to view an augmented reality race track through your console, making for an excellent personalized Mario Kart experience.

Not in the UK? Scroll down for more Mario Kart Live: Home Circuit deals in your region.

Mario Kart Live: Home Circuit: £99.99 £79.99 at Amazon We've seen Mario Kart Live drop down to £89.99 in the past, but this £79.99 sales price is the lowest yet. Not only that, but stock is holding out surprisingly well at this discount, with both the Mario and Luigi sets still available at Amazon.

Nintendo Switch deals are back in business this week, after stock shortages at the start of the year meant getting your hands on the console itself was proving difficult. You'll find stock available at Currys, as well as some more Nintendo Switch Lite bundles as well.

Nintendo Switch: £279 at Currys Nintendo Switch stock is back at Currys - just in time for the weekend. You'll find this red and blue model available for £279 right now, but move fast because we don't know how long this batch of stock will last. If that stock is shifted too fast, we're also seeing stock available at Amazon right now as well.

Nintendo Switch Lite: £199.99 £189.99 at 365 Games This is a rare sight - price drops on Nintendo Switch consoles don't come around too often, so this £10 discount is likely going to prove popular. We'd move quickly if you've had your eye on the system for a while then as this won't last long.

Nintendo Switch Lite Mario Kart 8 Deluxe: £209 at Currys You'll find Mario Kart 8, the must-have kart racer and a grey handheld console for the same £209 price here. That's a saving of nearly £30 and a stunning price for such a popular game.

We're also rounding up all the latest cheap Nintendo Switch game deals, as well as plenty more game deals across a range of platforms as well. However, you'll also find a range of Joy-Con deals and cheap Pro Controller prices available right now.

Nintendo dropped a surprise Direct presentation Thursday morning to celebrate Mario's 35th anniversary, and one of the biggest reveals is how the Mario Kart franchise will be swerving in an innovative new direction. Here's everything you need to know for pre-ordering what'll undoubtedly be a hit this holiday season: Mario Kart Live: Home Circuit.

Mario Kart Live: Home Circuit will let gamers pilot Mario-themed, remote-controlled cars and race them on elaborate real-world tracks they build in their living room. Each RC car comes with a built-in camera that will stream video back to the user's Switch, which will then overlay item boxes and track boundaries you'd expect out of any Mario Kart game onto the footage. This Amiibo-esque, augmented reality spin-off to the popular racing series was co-developed by New York-based dev Velan Studio.

The mixed-reality title will be released on October 16 and come with a Mario or Luigi RC car along with cardboard racing gates and signboards to design your raceway. Up to three friends can play together on the same course, but each will need their own Nintendo Switch, game, and cart.

The entire starter kit will come with the game, one RC car, all of the cardboard track pieces (4 gates and 2 arrow signboards), and a USB charging cable, all for $99.99. Nintendo only shared that pre-order details will be 'coming soon,' but here's how to make sure you can lockdown a Mario Kart Live: Home Circuit bundle just in case they sell out later this year. (Hint: They will.)

As of this writing, the full Mario and Luigi bundles are the only ways to play the game. It's unclear if additional carts featuring other classic Mario Kart characters will be sold separately.

Mario Kart fans aren't currently able to reserve a copy of Nintendo's newly announced RC car game. Pre-orders for the title will most likely begin in September, seeing as the game is less than two months from release.

Gamers can use a number of free web and mobile apps to make sure they know the exact moment Mario Kart Live: Home Circuit becomes available for pre-order.

Sites like Sken.io and VisualPing.io will notify users whenever a webpage changes. Copy the link for the Mario Kart Live: Home Circuit landing page and paste it into either of those sites. Then create an account with your email, select how often you want the services to monitor the site, and you'll receive a notification when Nintendo updates the site to announce pre-orders.

If you'd rather use your phone to track the game's pre-order status, iOS users can download Distill.io and Android users have access to Web Alert. Both of these mobile apps work just like their web counterparts, simply create an account and they'll send you email or push notifications when Nintendo's site is updated.

Nintendo didn't tease when gamers can expect pre-orders to go live, so it might be worth it to set your monitoring app to check the site once a day. There's been a short supply of Nintendo Switches due to the ongoing coronavirus pandemic due to backed-up supply chains. This could affect other Nintendo products, especially ones with various components like Mario Kart Live: Home Circuit. So make sure you don't miss a beat.

As of this writing, there's no way to know for sure where Mario Kart Live: Home Circuit will be sold. When pre-orders go live, mklive.nintendo.com/buy/ will have more information. However, trying to purchase almost any Nintendo product from the official website pulls up a list of retailers like Amazon, Walmart, Target, Best Buy, and GameStop that may be selling it online. Then there's, of course, the Nintendo Store. Which is to say that all the typical game retailers should have Mario Kart Live: Home Circuit in stock.

And because this kit involves peripherals, it's not like you can just resort to downloading the game digitally. As such, it's best to lock in a pre-order right when they go live rather than waiting until Mario Kart Live: Home Circuit is released in October. Otherwise, you run the risk of retailers running out.

Mario Kart Live: Home Circuit will be released for the Nintendo Switch on October 16.