This Macromedia-certified guide provides the key to learning the basics of Flash 8. Through a series of hands-on projects, master trainer James English provides a firm foundation in everything Flash from graphics, animation, and video to ActionScript fundamentals.

marketsmaster – Shareware – Windows
A major product release for Macromedia, Flash Professional 8 has many brand new features including: amazing graphic effects, integrated and stand-alone video encoding complete with support for alpha transparency, high-quality text rendering with advanced anti-aliasing control, improved text tools, and a new video plug-in to export Flash Video (FLV) files from professional video products. Great ideas deserve great tools. Macromedia provides full design control to maximize creativity, resulting in a consistent end-user experience across a variety of platforms. Flash Pro 8 gives you the creative and technical tools you need to unleash applications to the web, Windows, Macintosh, Unix, PDAs, and even cell phones. With Macromedia Flash Pro 8, you can reach the widest possible audience via the free and widely distributed Flash Player, installed on 98 percent of desktops globally. Flash Professional 8 includes a major focus on usability enhancements so developers can work more efficiently without the application getting in the way. Script Assist, formerly Normal Mode, is back, and it's better than ever. Script Assist provides a visual user interface for editing scripts that includes automatic syntax completion as well as descriptions for the parameters of any given action. With multiple files open, each open files is consolidated into a single panel that acts like all other panels in Flash - it stays where it's put. This way you can navigate between open libraries more easily using the new drop-down list. Improved panel management optimizes the workspace as you require. You can group panels together in tabbed-panel sets, ala Dreamweaver and Fireworks, thereby reducing on-screen clutter by grouping most commonly-used panels together. For projects that require large graphics that extend far beyond the size of the stage in Flash, Flash Professional 8 lets you view objects much further off-stage. To expand the size of the pasteboard, simply drag an object close to the edge.

Macromedia Flash Professional is a Shareware software in the category Web Development developed by marketsmaster.

Macromedia Flash Professional has not been rated by our users yet.

Macromedia Flash is a Shareware software in the category Development developed by Macromedia.

It was checked for updates 440 times by the users of our client application UpdateStar during the last month. 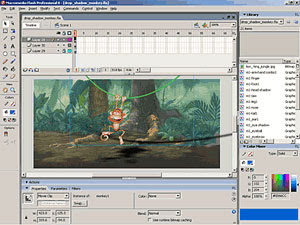 Users of Macromedia Flash gave it a rating of 4 out of 5 stars.

Write a review for Macromedia Flash!